It Really Is Good To Talk 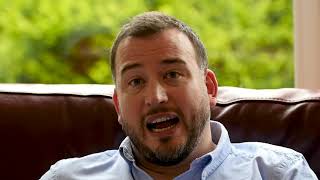 Firstly, thank you for all the nice messages we received last week on our first ever blog post. These were all received privately but if you wish, you can comment publicly at the foot of this page. Happy reading.

Last week I had the dreaded dentist appointment in my diary! Following a routine check-up the week previous, I was advised I needed a (small) filling to one of my teeth. Nobody enjoys the numbing of the face and the drilling to your teeth, but the dentist was great and it was all done relatively pain-free and in double-quick time. All good. So, why am I telling you this?

Well, it got me thinking back to a less pleasant visit I had at the dentist (a different one I hasten to add) about 13 years ago. It was actually in the lead up to my brother’s wedding and I was best man, along with my younger brother, when a few days before the big day I had excruciating pain in one of my teeth. It was agony. I panicked…how can I deliver an award-winning best man speech if my face is in so much pain!?! Stupidly, I wasn’t currently registered to a dentist but managed to get an appointment two days before the wedding day. What a relief.

Upon attending my appointment, I was shocked to learn I needed 3 fillings. I was now in my early 20’s and I had never had any fillings before as was always very regimented in looking after my teeth. However, it wasn’t the pain of an hour of drilling that I remember, it was the pain of the dentist’s words and behaviour towards me. She scorned and tutted, and basically belittled me for the need for treatment. Shaking her head and making snide comments – not only was it very unprofessional, but I am not ashamed to admit it made me feel like rubbish…especially after the shock of finding out I needed 3 fillings and then the fact the offending dentist seemed angry when about to drill in to my teeth. So, again, why am I telling you this?

A couple of years previous to this appointment, my mum lost her battle with breast cancer. For a couple of years after, as I am sure is fairly normal with such a loss, my normal ‘life routine’ disappeared. Simple everyday functions and actions we take for granted became unimportant. Things such as taking a shower, cleaning your teeth or making a coffee becoming more akin to climbing Everest than easy everyday functions. Also, my lifestyle changed. I was currently a student at university so admittedly it wasn’t the healthiest lifestyle in the world already, but my drinking increased, my eating of fatty and sugary foods increased – for a significant period of time I was in a daze and life was about surviving.

I’m pretty thick skinned so a couple of days after this uncomfortable dentist appointment, I was celebrating my brother’s wedding day and the interaction with this dentist was history. However, the dentist’s reaction and behaviour has stuck with me, because I am sure many of us can resonate with that part of her that openly passed judgement. My need for those fillings was directly related to a very difficult moment in my life. Not only had it changed my lifestyle and daily routine for a period of time, but I also hadn’t been organised in terms of things like registering with a dentist. Having been registered with the university dentist, this automatically ended when I graduated and it never crossed my mind at that time until the toothache occurred.

My point is, we will often not know what is going on in other people’s lives. That dentist knew nothing about me, but was happy to criticise and judge me. Now, I am not picking on this dentist, but I am hoping to highlight that part of them that is present in all of us, where we feel the need to judge others without knowing anything about them. We all do it, I know I have. So, the next time you go to laugh and point out the person lying beside you on holiday for being overweight, underweight, wearing a wig, try to pause for just a second. Maybe they have an eating disorder, maybe they suffer from severe depression, maybe they have just undergone chemotherapy or maybe they have just lost a loved one.

“They are so lazy, if they are late one more time they will face disciplinary action.”

“I see they are off sick again, probably with ‘stress’. What do they have to be stressed about. Time waster.”

“Are they stupid or just taking the mick? How many mistakes can one person make?”

Sound familiar? I am not suggesting leaders and managers of organisations should be blindly naïve but wouldn’t it be a better place to work if we gave people the benefit of the doubt? Innocent until proven guilty and not the other way around? Are they being lazy or do they care for an elderly relative but are too embarrassed to say? Are they dyslexic and the training isn’t working for them so mistakes occur? There could be a million and one reasons why colleagues are behaving as they are. The easy option is to immediately judge them and disregard them as a valuable colleague or person.

The good news is, there is an easy answer to how to change this behaviour….TALKING. Assume the best not the worst. If you have a colleague who is consistently late – take them for a coffee, have a chat with them and find out if they are ok, are they happy at work, are there other factors out of work impacting their life or/and health? And then support the colleague, build that trust and move forward together. Sounds simple? It is, but then so is dismissing people and judging people based on only some of the information. We wouldn’t make a business decision based on only some of the information, so why do the same with people?

Never underestimate the power of talking and the human connection. And you never know when you need that compassion, not judgement, in return. As always, any feedback or comments would be much appreciated. Thanks for reading.

‘Limited by name, limitless by nature.’